Explore the need and rise of SDET in testing and how it differs from QA.

Himanshu Kansara
QA
min read
SDET vs QA - Addressing The Latest Debate
Explore the need and rise of SDET in testing and how it differs from QA.

Himanshu Kansara
Table of contents
What is SDET?
SDET vs QA – Core Differences
Need For SDET
How Does One Become A Highly Effective SDET?
In Conclusion

What is SDET? What is the difference between SDET and QA? Do you really need a software development engineer in testing? Let’s discuss and find the answers to these questions. 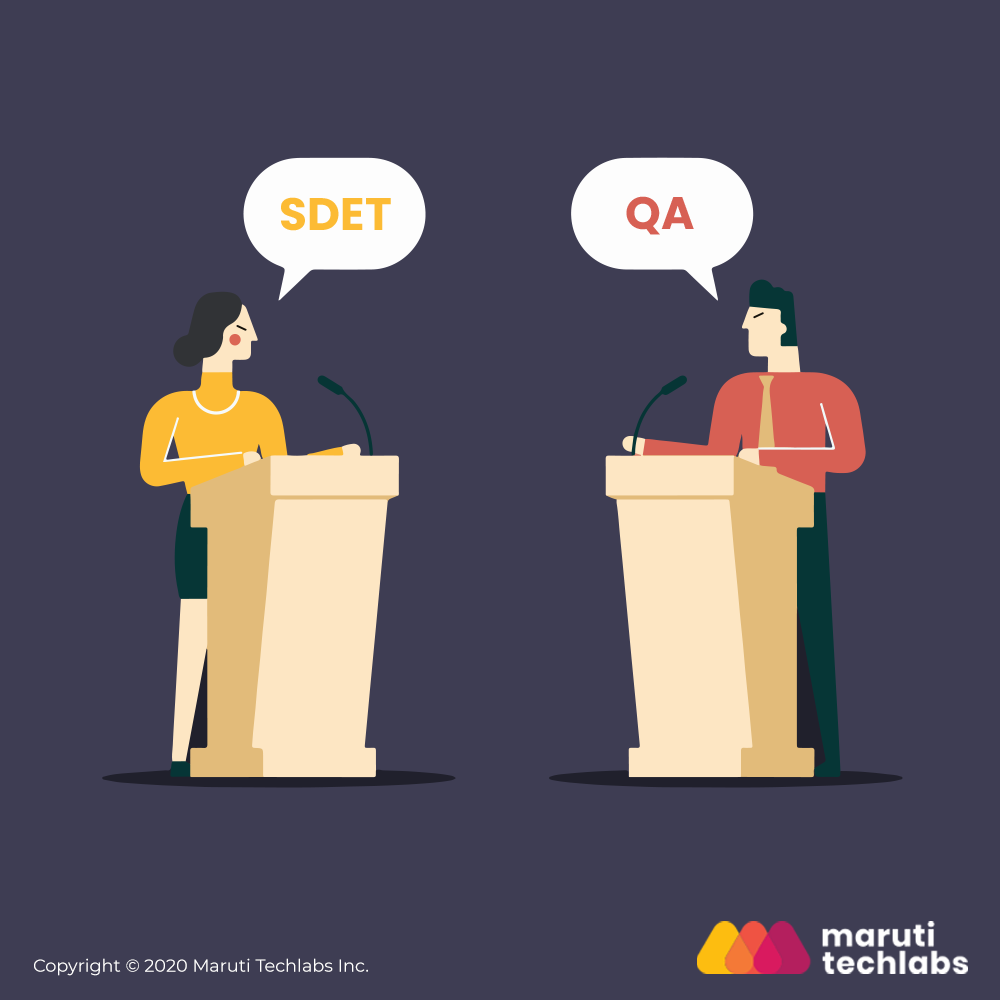 “Quality is never an accident; it is always the result of intelligent effort.” – John Ruskin.
And testers contribute largely to this effort in ensuring quality in the software development space.

From putting it last in priority list to making it a key component of software development, people have realized that software testing is a crucial and decisive stage in the software development life cycle. Resultantly, testing methodologies have undergone changes over time.

The changing testing methodologies have also led to a change in the role of testers. A Quality Assurance Engineer or QA Engineer is a traditional testing role. A new addition to the testing roles is Software Development Engineer in Test or SDET. It is a relatively new role that still leaves many confused and wondering.

Here we discuss the need and rise of SDET in testing, what is SDET and how it is different from QA.

An Software Development Engineer in Test (SDET) is an amalgamation of a developer and a test engineer. An SDET is someone who is involved in the project right from its planning stage and can help automate the testing process. A software development engineer in test is essentially a developer.

Whereas, a QA Engineer is someone who has complete knowledge of various testing processes and methodologies. They should also be well-versed in data management, bug reporting, troubleshooting and test environments.

The definition of the roles should have given you an insight into the differences between an SDET vs QA. However, the definitions are just a brief introduction into how these two roles differ. Here are some more points of differentiation that will help you gain a better understanding of the roles.

The responsibilities of a QA engineer are as follows:

The roles and responsibilities of an SDET involve the following:

As you can see, the SDET is mainly responsible for automating tests and delivering a high-quality, reliable and scalable product by engaging in the development process from the beginning. In comparison, the QA is purely responsible for the testing and does not take part in the planning and design phases.

2. Skills Needed For The Job – SDET vs QA

The difference in the roles and responsibilities of both positions translates into a difference in the skills needed for the job as well. A QA should be well-versed in the use of test tools such as Selenium, developing and running test cases and creating and tracking bugs. A QA engineer only needs basic programming knowledge.

In contrast, a software development engineer in test should be well-versed in various programming languages and should be able to understand the development process. They should also be able to translate customer requirements into test scenarios.

Since SDETs have to work with developers, testers and clients, communication and leadership skills are equally important for the job. SDETs need to have excellent people skills to effectively collaborate with various teams. 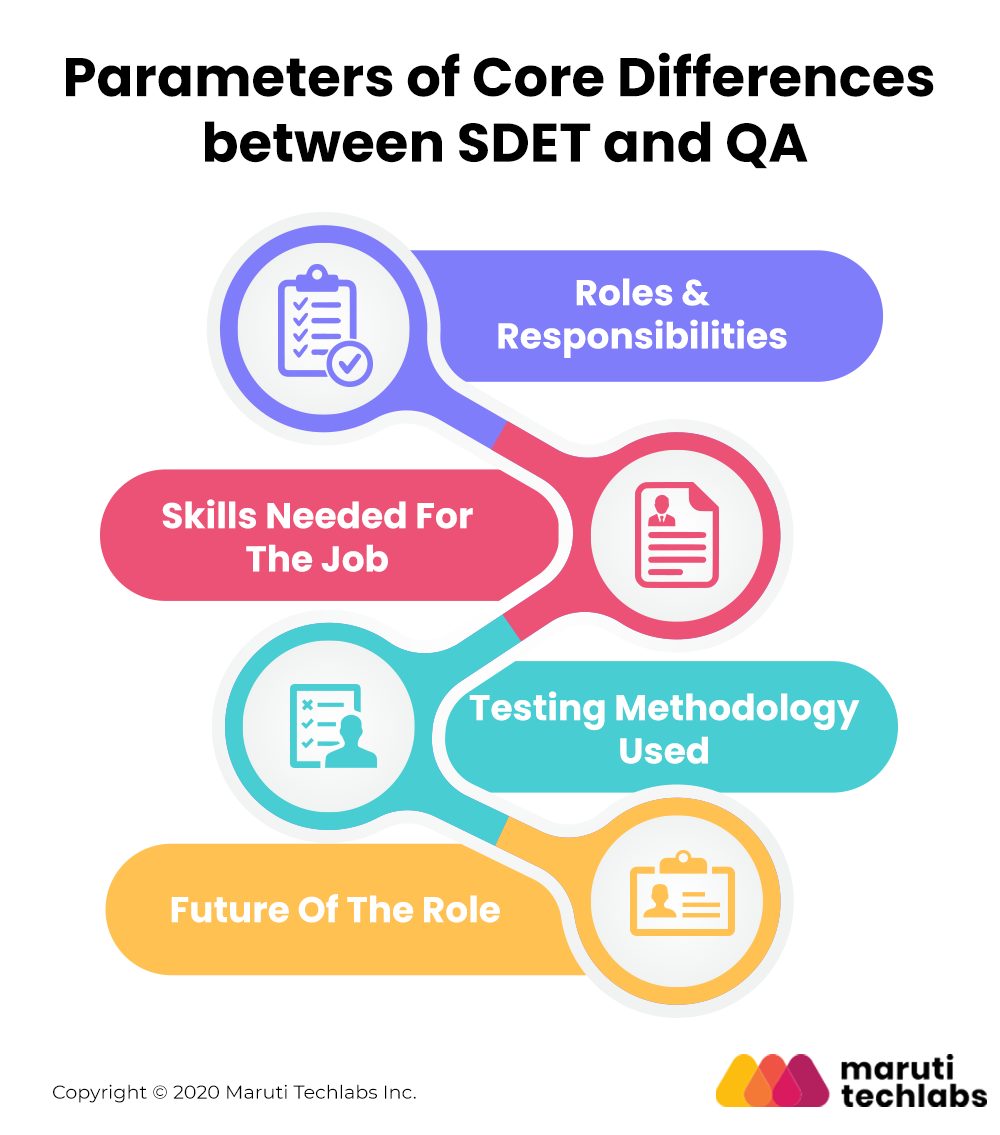 The QA engineer performs black-box testing. They are only concerned about the functionality of each component. The internal code is not of concern. However, an SDET needs to perform white box testing. They need to ensure that not only is the component functioning as per specifications, its code is also reliable and robust.

The responsibilities of an SDET are greater than those of a QA engineer. In addition to this, a software engineer in test should have knowledge of various programming languages as well as testing tools. Given these conditions, it is understandable that the average income of an SDET is higher than that of a QA engineer.

4. Future Of The Role

With the advent of automation in testing, manual testing has become redundant and is on its way out. The top software companies, such as Google and Facebook, have already done away with the role of QA engineers. Going by the trend of these industry leaders, SDETs are the future.

If you are a QA engineer right now, then this is the time to upskill yourself. Learn new languages and try your hand at automating tests. The need for a QA engineer may not die down completely, but it will reduce, and SDETs will be the ones replacing the QA engineers.

This is the era of automation. SDETs take the testing to the next level by improving the code quality along with making the product bug free. The software industry is moving towards automated testing for functionality, security and performance of the product.

SDETs play a crucial role in this process. With their superior skill set and knowledge of various testing tools and programming languages, test development engineers are key to ensuring that the client gets a high-quality, bug-free, reliable, scalable and robust product.

How Does One Become A Highly Effective SDET?

The software development engineer in test has various responsibilities that impact the final product. It is a complex role that requires dedication. Wondering how to be the best SDET there is? Here are a few tips to guide you.

Our proficient SDETs are well-versed with the latest tools and technologies. We, at Maruti Techlabs, have helped many companies ensure unmatched performance with our all-rounding testing services.

For accurate and exceptional testing services, Maruti Techlabs is your one-stop solution. Get in touch with us here.

About the author
Himanshu Kansara

Himanshu is the VP of QA & Operations at Maruti Techlabs. His sharp eye for detail ensures everything works perfectly - both in the organization and the software we ship.

Everything You Need to Know about Test Automation Frameworks

Check out what excatly is a testing automation framework and automation script.

Here are some actionable tips from our QA team on implementing QA testing into your CI/CD pipeline.

Here are some ways automation testing can help you achieve quality assurance and drive business value.

QA - 10 MIN READ
Everything You Need to Know about Test Automation Frameworks
Check out what excatly is a testing automation framework and automation script.

QA - 8 MIN READ
Implementing QA in a CI/CD Pipeline - Best Practices & Tips
Here are some actionable tips from our QA team on implementing QA testing into your CI/CD pipeline.