Traditional Testing Vs. Agile Testing - Which Way To Go?

Learn the traditional & modern testing principles in more detail in terms of their features and benefits.

Himanshu Kansara
QA
min read
Traditional Testing Vs. Agile Testing - Which Way To Go?
Learn the traditional & modern testing principles in more detail in terms of their features and benefits.

The scope of software testing and the role of testers in the process of development is rapidly evolving. Enterprises today focus on delivering quality and releasing products faster. Making the right choice between traditional testing vs. agile testing is essential to accomplishing this.

What is Traditional Testing? 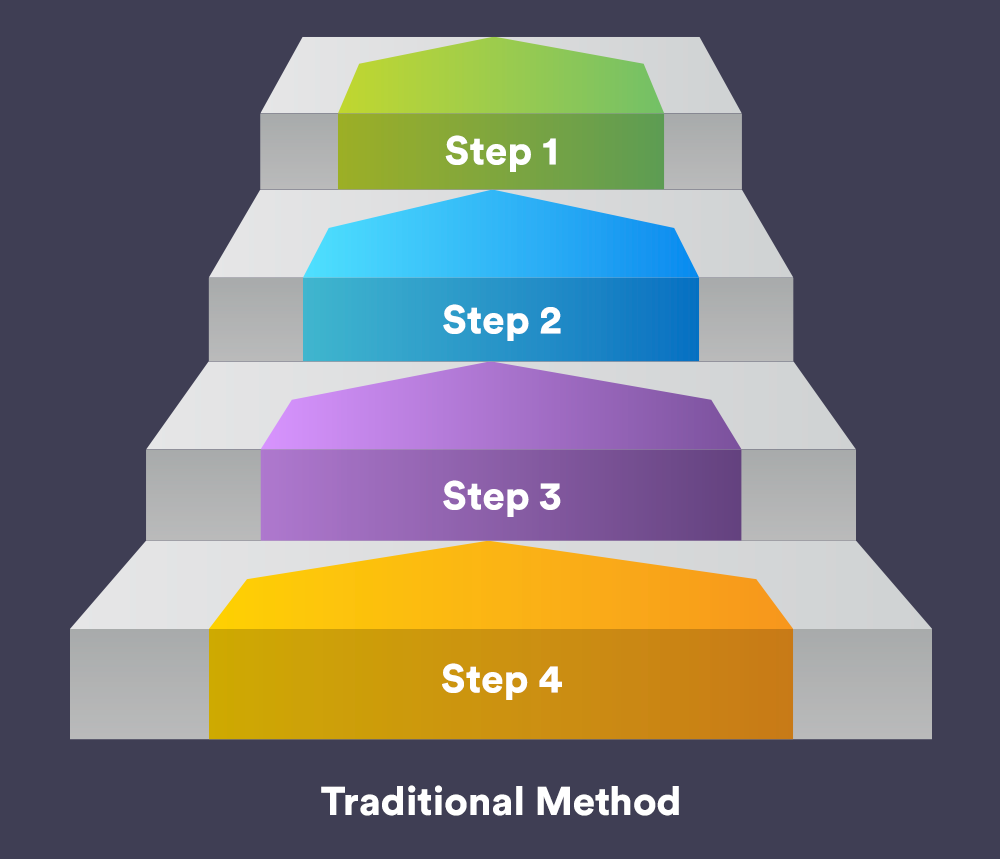 Traditional testing methodologies have been in existence since the inception of software development. They are primarily based on pre-organized phases/stages of the software testing life cycle. In this case, the testing flow is unidirectional, from testing to maintenance. With time, IT practices have evolved and so have testing approaches, as traditional testing usually fails to address the product’s continuous testing needs.

With rapid technological developments and an increasing number of organizations entering into the software testing space, software testers are capable of different testing processes and optimizing these processes at multiple levels of testing by following the modern ways of testing.

This modern or agile software testing practice is an iterative and incremental approach. It typically covers all layers and all types of testing. The entire testing team collaborates to find defects in the software while validating its quality, performance, and effectiveness.

In agile testing methodology, both the development and testing tasks are performed collaboratively while ensuring an exclusive tester for testing purposes.

The agile or modern testing approach ensures that the testing and the development processes are closely linked. Testers work as a part of the development team and report on quality issues that can affect end-users, and suggest solutions. 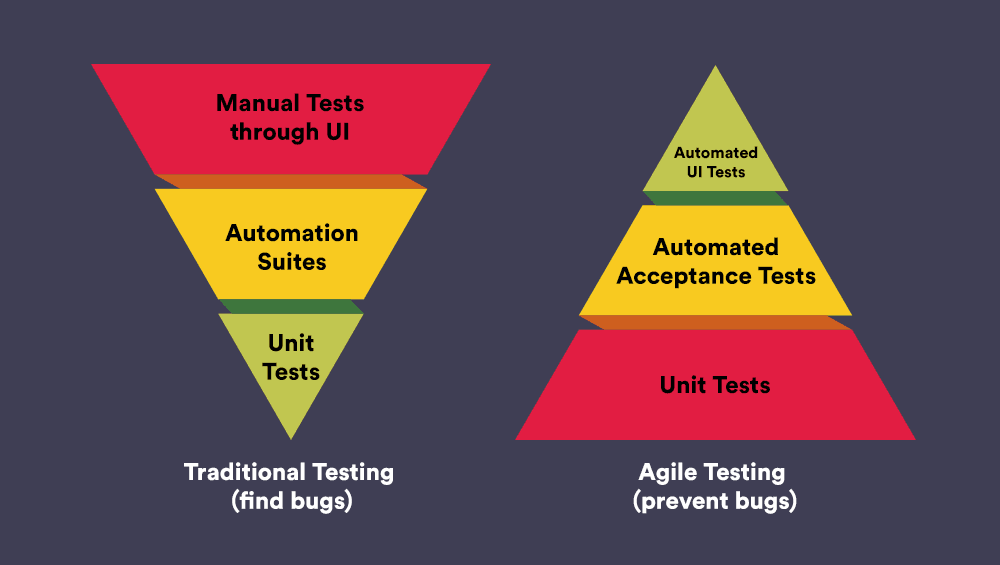 Here are some of the parameters that distinguish traditional testing vs. modern testing approach –

While traditional testing practices are based on the philosophy of fixed/ concrete requirements and resolution of defects first and then release the product, the modern testing approach follows test-first philosophy where flaws are fixed in each sprint before release.

Further, in agile testing projects, the requirements are not fixed, i.e., changes can be introduced healthily, indicating that the test case is open to exploring more considerations and customizations.

The traditional method follows a predictive model with a phased approach. It involves a top-down approach, wherein testing is executed step-by-step.

Agile, on the other hand, follows a more iterative and adaptive model with stages such as project planning, risk management, design and development, and testing.

The primary function of the traditional testing approach is to certify the quality of the products. In comparison, the modern testing principles ensure the product’s quality and fast delivery with minimal functionalities.

In traditional testing, there is no user feedback taken until testing is done. The agile approach follows short ongoing feedback cycles at the end of every sprint.

When it comes to the testing approach, automation is hardly used and is a more routine practice for developers. Agile testing, on the other hand, encourages the process of automation aggressively in a testing scenario.

Traditional testing approaches rely heavily on documentation with all the use cases and test case preparations involved.

Whereas, in agile testing, documentation isn’t an essential part of a QA. QA testers, in this case, assimilate the facts that they need in any form, without much documentation, and carry off with the process.

While the traditional methodology is risk-averse, agile follows the timely and efficient risk-prevention approach.

Why Is Agile Preferred Over Traditional Software Testing Approach?

Today, customers expect as well as demand faster implementation and update on their software products. Software companies across the board are continually trying to improve their products or applications by fixing bugs and identifying errors to release new versions with better features and functionality.

To keep pace with these disruptive trends and cater to both old and new versions of applications, an increasing number of organizations are adopting software testing in an agile environment.

Unlike the traditional software testing approach where there is a lack of connection between developers and the testers due to multiple factors such as communication gaps, incorrect test strategies, and unrealistic schedules, agile software testing is much more focused and fast. It also helps to save time and streamlines the overall software development process by reducing the cost of fixing bugs in the initial development stages.

Agile testing teams perform tests regularly to make sure that the product is continuously progressing. Further, in this case, testing is done in conjunction with development to bring in greater transparency in the process.

The incremental and iterative models used in the agile or modern testing approach minimizes the overall time taken between specifying test requirements and validating results. It leads to faster product releases without any delay.

In the Agile testing approach, the business team participates in each iteration. This kind of ongoing feedback helps to reduce the time taken to get feedback on software development work.

Agile testing is well-known for fixing defects instantly due to the teams of software testers and developers working collaboratively with each other, enabling them to share immediate feedback. It helps to bring in both accountability and tighter alignment, which further facilitates the fixing of errors and defects in the early testing phase.

With a strong team of developers, testers, architects, and coders working closely in the agile testing methodology, there is more face to face communication throughout the entire software testing life cycle. It eliminates the need for lengthy documentation processes leading to faster and quicker test results.

The Agile testing approach ensures that the teams test the software so that the code is clean and tight. Additionally, the software’s regular testing allows for all the issues and vulnerabilities to be detected quickly and fixed in the same iteration as they are being developed.

Challenges While Transitioning From Traditional To Modern Testing Practices

While automated or agile testing has obvious benefits, including improved quality, accelerated delivery, and reduced costs, making the transition from manual to automated testing isn’t an easy task.

Implementing a robust software testing strategy is the foundation of continuous delivery in any organization. While there is no one-size-fits-all approach, it is safe to say that modern testing methodology is considered more appropriate at handling various testing challenges than traditional testing principles. It is, in fact, a robust investment into the future reliability of your software product. If you can find a way to implement modern or agile testing practices early on, your company can save significant stress and costs in the future.

To successfully implement modern testing practices, you need QA experts who help you work with digital as well as legacy systems for unmatched performance. We, at Maruti Techlabs, provide a full cycle of Quality Engineering services that enables quicker bug detection and closure, seamless coordination, and lesser turnaround time for product release. For flawless performance at every stage, get in touch with us here.

About the author
Himanshu Kansara

Himanshu is the VP of QA & Operations at Maruti Techlabs. His sharp eye for detail ensures everything works perfectly - both in the organization and the software we ship.

Everything You Need to Know about Test Automation Frameworks

Check out what excatly is a testing automation framework and automation script.

Here are some ways automation testing can help you achieve quality assurance and drive business value.

QA - 10 MIN READ
Everything You Need to Know about Test Automation Frameworks
Check out what excatly is a testing automation framework and automation script.