What are the use cases and advantages of Cognitive Computing?

Develop a cutting-edge solution for your business by exploring the use cases and advantages of cognitive computing.

Cognitive computing has taken the tech industry by storm and has become the new buzzword among entrepreneurs and tech enthusiasts. Based on the basic premise of stimulating the human thought process, the applications and advantages of cognitive computing are a step beyond the conventional AI systems.

According to David Kenny, General Manager, IBM Watson – the most advanced cognitive computing framework, “AI can only be as smart as the people teaching it.” The same is not true for the latest cognitive revolution. Cognitive computing process uses a blend of artificial intelligence, neural networks, machine learning, natural language processing, sentiment analysis and contextual awareness to solve day-to-day problems just like humans. IBM defines cognitive computing as an advanced system that learns at scale, reason with purpose and interacts with humans in a natural form.

Unlike artificial intelligence systems that just takes care of a given problem, cognitive computing learns by studying patterns and suggests humans to take relevant action based on its understanding. In the case of artificial intelligence, the system takes full control of a process and takes steps to complete a task or avoid a scenario by using a pre-defined algorithm. While in comparison, cognitive computing is a different field altogether where it serves as an assistant instead of the one completing the task. In this way, cognitive computing gives humans the power of faster and more accurate data analysis without having to worry about the wrong decisions taken by the machine learning system.

As discussed above, cognitive computing’s main aim is to assist humans in decision making. This endows humans with superior grade precision in analysis while ensuring everything is in their control. To illustrate, let’s take the example of artificial intelligence in healthcare system. An AI-backed system would make all decision regarding treatment without consultation with a human doctor, while cognitive computing would supplement the human diagnosis with its own set of data and analysis which helps in improves the quality of decision and adds a human touch to critical processes. 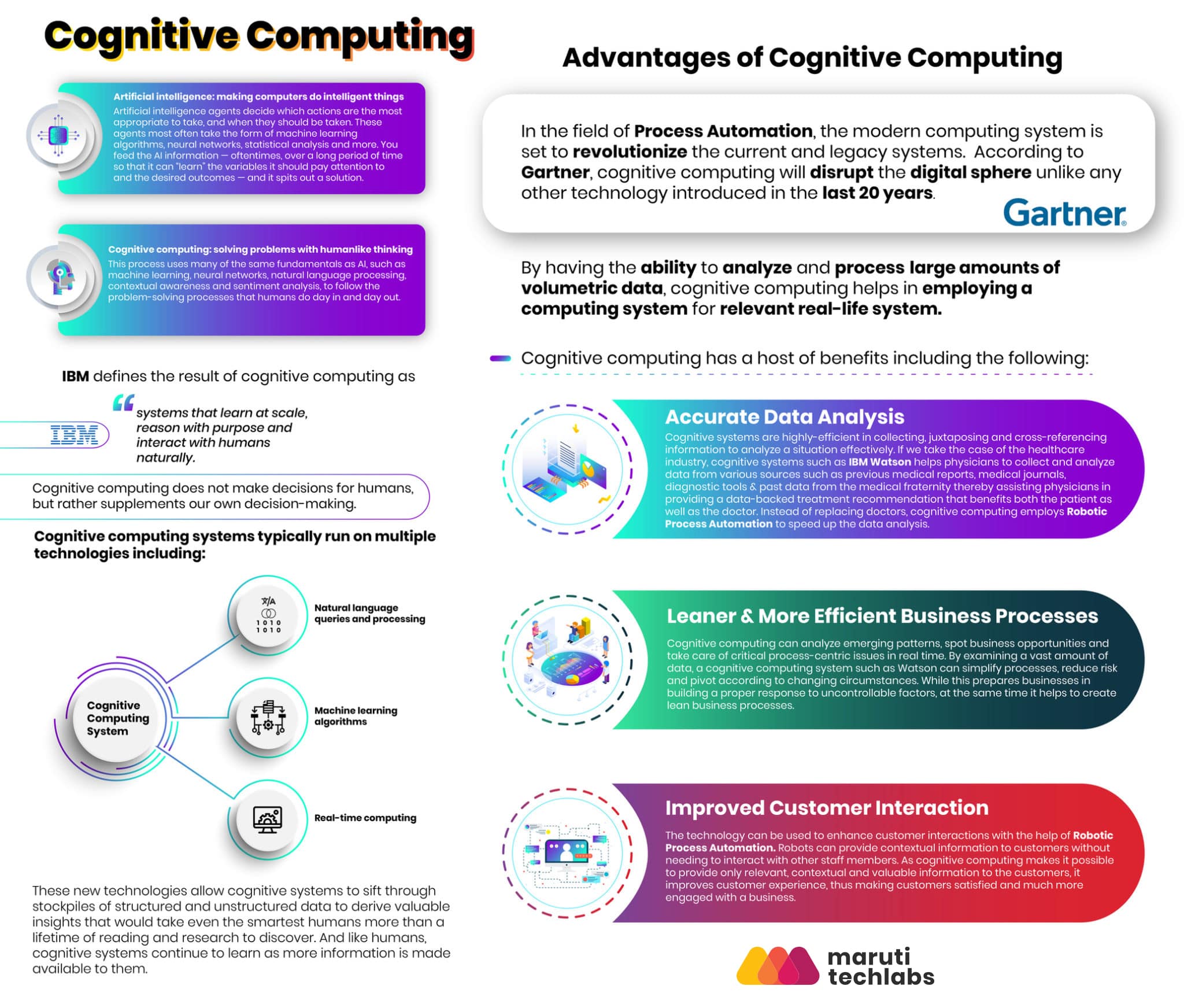 Cognitive systems are highly-efficient in collecting, juxtaposing and cross-referencing information to analyze a situation effectively. If we take the case of the healthcare industry, cognitive systems such as IBM Watson helps physicians to collect and analyze data from various sources such as previous medical reports, medical journals, diagnostic tools & past data from the medical fraternity thereby assisting physicians in providing a data-backed treatment recommendation that benefits both the patient as well as the doctor. Instead of replacing doctors, cognitive computing employs robotic process automation to speed up the data analysis.

Cognitive computing can analyze emerging patterns, spot business opportunities and take care of critical process-centric issues in real time. By examining a vast amount of data, a cognitive computing system such as Watson can simplify processes, reduce risk and pivot according to changing circumstances. While this prepares businesses in building a proper response to uncontrollable factors, at the same time it helps to create lean business processes.

The technology can be used to enhance customer interactions with the help of robotic process automation. Robots can provide contextual information to customers without needing to interact with other staff members. As cognitive computing makes it possible to provide only relevant, contextual and valuable information to the customers, it improves customer experience, thus making customers satisfied and much more engaged with a business.

Cognitive Computing at Work: How Global Organizations are Leveraging the Technology

With the help of IBM Watson, Royal Bank of Scotland developed an intelligent assistant that is capable of handling 5000 queries in a single day. Using cognitive learning capabilities, the assistant gave RBS the ability to analyze customer grievance data and create a repository of commonly asked questions. Not only did the assistant analyze queries, but, it was also capable of providing 1000 different responses and understand 200 customer intents.

The digital assistant learned how customers ask general questions, how to handle the query and transfer to a human agent if it is too complicated.

Welltok developed an efficient healthcare concierge – CaféWell that updates customers relevant health information by processing a vast amount of medical data. CaféWell is a holistic population health tool that is being used by health insurance providers to help their customers with relevant information that improves their health. By collecting data from various sources and instant processing of questions by end-users, CaféWell offers smart and custom health recommendations that enhance the health quotient.

Welltok’s CEO, Jeff Margolis while discussing CaféWell says, “We must transform beyond the current ‘sick-care’ system built for patients, to one that optimizes each consumer’s health status. To do so, the industry needs a practical, but a radically different approach to engaging the 85% of the nation’s population who are making daily choices that impact their health”

Powered with cognitive technology, WayBlazer’s travel planer makes it easier for travelers to plan for trips by asking questions in natural language. The concierge asks basic questions and provides customized results by collecting and processing travel data as well as insights about traveler preferences.

Such type of cognitive-powered tool helps travelers to save time in searching for flights, booking hotels and plan activities without researching on several websites before finalizing on travel. Travel agents have been successfully using such a tool that has helped increase their revenues and customer delight at the same time.

Fantasy Football is a very popular entertainment pastime for more than 33 million people around the globe. With the help of cognitive learning and computing, Edge Up Sports developed a tool and integrated with their mobile app that helped users to draft their fantasy teams by asking simple questions.

The questions, drafted in natural language, make it easier for users to take a decision which is then analyzed by the system by browsing through data about a player across social media, news reports and gauging user sentiment that help team managers make better decisions.

Problems with Cognitive Computing: Challenges for a Better Future

Every new technology faces some issues during its lifecycle. Despite having the potential to change lives owing to inherent advantages of cognitive computing, the innovation is being resisted by humans due to the fear of change. People are coming up with several cognitive computing disadvantages throwing significant challenges in the path towards greater adoption, such as below:

When digital devices manage critical information, the question of security automatically comes into the picture. With the capability to handle a large amount of data and analyze the same, cognitive computing has a significant challenge concerning data security and encryption.

With more and more connected devices coming into the picture, cognitive computing will have to think about the issues related to a security breach by developing a full-proof security plan that also has a mechanism to identify suspicious activity to promote data integrity.

The biggest hurdle in the path of success for any new technology is voluntary adoption. To make cognitive computing successful, it is essential to develop a long-term vision of how the new technology will make processes and businesses better.

Through collaboration between various stakeholders such as technology developers, enterprises, government and individuals, the adoption process can be streamlined. At the same time, it is essential to have a data privacy framework that will further boost adoption of cognitive computing.

Change management is another crucial challenge that cognitive computing will have to overcome. People are resistant to change because of their natural human behavior & as cognitive computing has the power to learn like humans, people are fearful that machines would replace humans someday. This has gone on to impact the growth prospects to a high level.

However, cognitive technology is built to work in sync with humans. Human beings will nurture the technology by feeding information into the systems. This makes it a great example of a human-machine interaction that people will have to accept.

One of the greatest challenges is the time invested in the development of scenario-based applications via cognitive computing. Cognitive computing currently is being developed as a generalized solution – this means that the solution cannot be implemented across multiple industry segments without powerful development teams and a considerable amount of time to develop a solution.

Lengthy development cycles make it harder for smaller companies to develop cognitive capabilities on their own. With time, as the development lifecycles tend to shorten, cognitive computing will acquire a bigger stage in the future for sure.

As a part of the digital evolutionary cycle, cognitive technology adoption starts with the identification of manual processes that can be automated using the technology. Many companies such as IBM have already pioneered the cognitive technology sphere that is fueling several truly-digital organizations across the globe.

With every passing minute, more data is being analyzed to gain insights into past events and improve current and future processes. Not only does cognitive tech help in previous analysis but will also assist in predicting future events much more accurately through predictive analysis.

Being such a robust and agile technology, the future possibilities and avenues both in B2B and B2C segment are immense. The power and advantages of cognitive computing is being already leveraged in financial and healthcare domains with IBM Watson. In the future, it is believed that such a technology will help humans become more efficient than before, delegate mundane analysis and focus on creative work.

Despite all the challenges and hurdles, the benefits of cognitive technology cannot be overlooked. It will be in favor of all the organizations and humanity, at large, to start the transition process and adopt innovative technology for a bright and much more efficient future.

Cognitive technology is sure to revolutionize multiple industry segments in the years to come. For every business, this entails an excellent opportunity to leverage for making a multitude of processes leaner. To utilize the full potential of innovative breakthroughs like cognitive tech, you need a resilient tech partner that understands the modern trends & is engaged in developing cutting-edge business solutions. If you would like to understand how we can assist you in adopting AI & Cognitive Technology within your business, get in touch today and find how we can help improve critical business processes through ingenuity and innovation.

Understand your data in a new way and make better decisions for your business using computer vision.

What is the Working of Image Recognition and How is it Used?

Learn image recognition, its working and uses to enhance your business with the power of artificial intelligence.

What are the advantages of Natural Language Generation and its impact on Business Intelligence?

Explore the advantages of natural language generation and its impact on business growth.

Artificial Intelligence and Machine Learning - 15 MIN READ
What is the Working of Image Recognition and How is it Used?
Learn image recognition, its working and uses to enhance your business with the power of artificial intelligence.