As simple as the term seems, Computer Vision is a complex technology and a critical factor in the rise of automation. There are many computer vision applications – from facial recognition, object recognition to image restoration, motion detection, and more. Computer vision applications are seen in a plethora of industries such as tech, medical, automobiles, manufacturing, fitness, security systems, mining, precision agriculture, etc.

Computer vision uses specialized methods and general recognition algorithms, making it the subfield of artificial intelligence and machine learning. Here, when we talk about drawing analysis from the digital image, computer vision focuses on analyzing descriptions from the image, which can be text, object, or even a three-dimensional model. In short, computer vision is a method used to reproduce the capability of human vision.

Before 2012, the working of computer vision was quite different from what we are experiencing now. For example, if we wanted the computer system to recognize the image of a dog, we had to include the understanding and explanation of the dog in the system itself for the output. A dog consists of several different features: head, ears, four legs, and a tail. All these details were stored in the system’s memory for conceptual understanding for recognizing the dog, which further triggered the output. The object’s explanation used to be stored in the form of pixels, i.e., most minor units of visual data.

When the object needed to be recognized in the future, the system divided the digital image into subparts of raw data and matched it with the pixels in its memory. This process was not efficient enough as the system would fail if the slightest change were observed in the color of the object or even if the level of lightness was changed. Also, it became difficult to store the detail of every single object individually in the system for its future recognition. Eventually, it became burdensome for the engineers to craft the rules to detect the features of images manually.

The neural network model of machine learning trains the system to use a bottom-up approach. The algorithm analyzes the dog’s features in general and classifies it with previously unseen images to draw the most accurate results. This process happens by training the model using massive datasets and countless training cycles.

Neural network-backed computer vision is possible because of the abundance of image data available today and the reduced computing power required to process the datasets. Millions of image databases are accurately labeled for deep learning algorithms to work on. It has helped deep learning models successfully surpass the hard work of traditional machine learning models for manual feature detectors.

This modern neural network algorithm is precious for various things like diagnosing tissue samples because, as per studies, human visuals limit the image resolution to 2290 pixels per inch. Hence, even the slightest change in the density can change the final results and mislead the experts.

Moreover, when it comes to humans working excessively on the exact image resolution for over a long time, it creates human fatigue, which results in poor business outcomes and risks of lives when the problems are related to infrastructures or aircraft maintenance. But this problem comes to an end by improving the ability of computer vision systems to get precise results and perform continuously over a long time using neural network models.

As studied earlier, computer networks are one of the most popular and well-researched automation topics over the last many years. But along with advantages and uses, computer vision has its challenges in the department of modern applications, which deep neural networks can address quickly and efficiently. 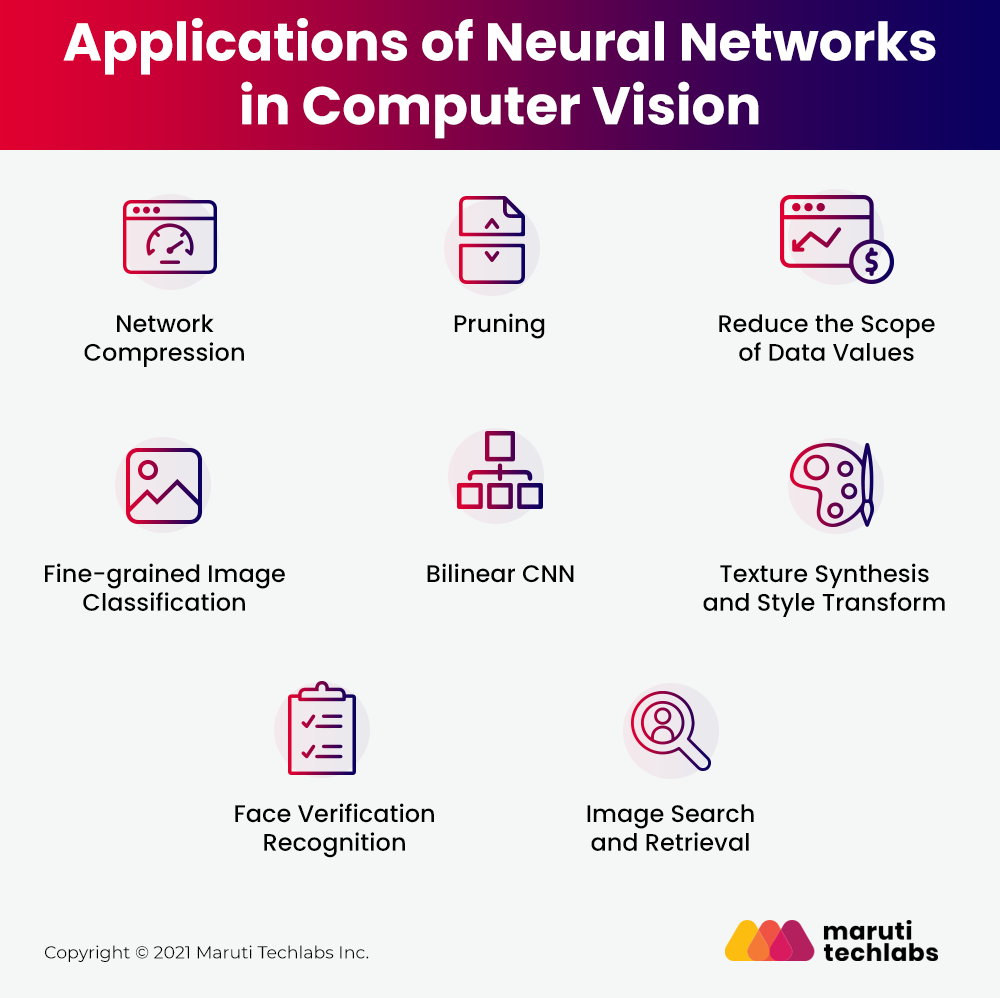 With the soaring demand for computing power and storage, it is challenging to deploy deep neural network applications. Consequently, while implementing the neural network model for computer vision, a lot of effort and work is put in to increase its precision and decrease the complexity of the model.

For example, to reduce the complexity of networks and increase the result accuracy, we can use a singular value decomposition matrix to obtain the low-rank approximation.

After the model training for computer vision, it is crucial to eliminate the irrelevant neuron connections by performing several filtrations of fine-tuning. Therefore, as a result, it will increase the difficulty of the system to access the memory and cache.

Sometimes, we also have to design a unique collaborative database as a backup. In comparison to that, filter-level pruning helps to directly refine the current database and determine the filter’s importance in the process.

3. Reduce the Scope of Data Values

The data outcome of the system consists of 32 bits floating point precision. But the engineers have discovered that using the half-precision floating points, taking up to 16 bits, does not affect the model’s performance. As the final solution, the range of data is either two or three values as 0/1 or 0/1/-1, respectively.

It is difficult for the system to identify the image’s class precisely when it comes to image classification. For example, if we want to determine the exact type of a bird, it generally classifies it into a minimal class. It cannot precisely identify the exact difference between two bird species with a slight difference. But, with fine-grained image classification, the accuracy of image processing increases.

Fine-grained image classification uses the step-by-step approach and understanding the different areas of the image, for example, features of the bird, and then analyzing those features to classify the image completely. Using this, the precision of the system increases but the challenge of handling the huge database increases. Also, it is difficult to tag the location information of the image pixels manually. But in comparison to the standard image classification process, the advantage of using fine-grained classification is that the model is supervised by using image notes without additional training.

When the system is given a typical image and an image with a fixed style, the style transformation will retain the original contents of the image along with transforming the image into that fixed style. The texture synthesis process creates a large image consisting of the same texture. 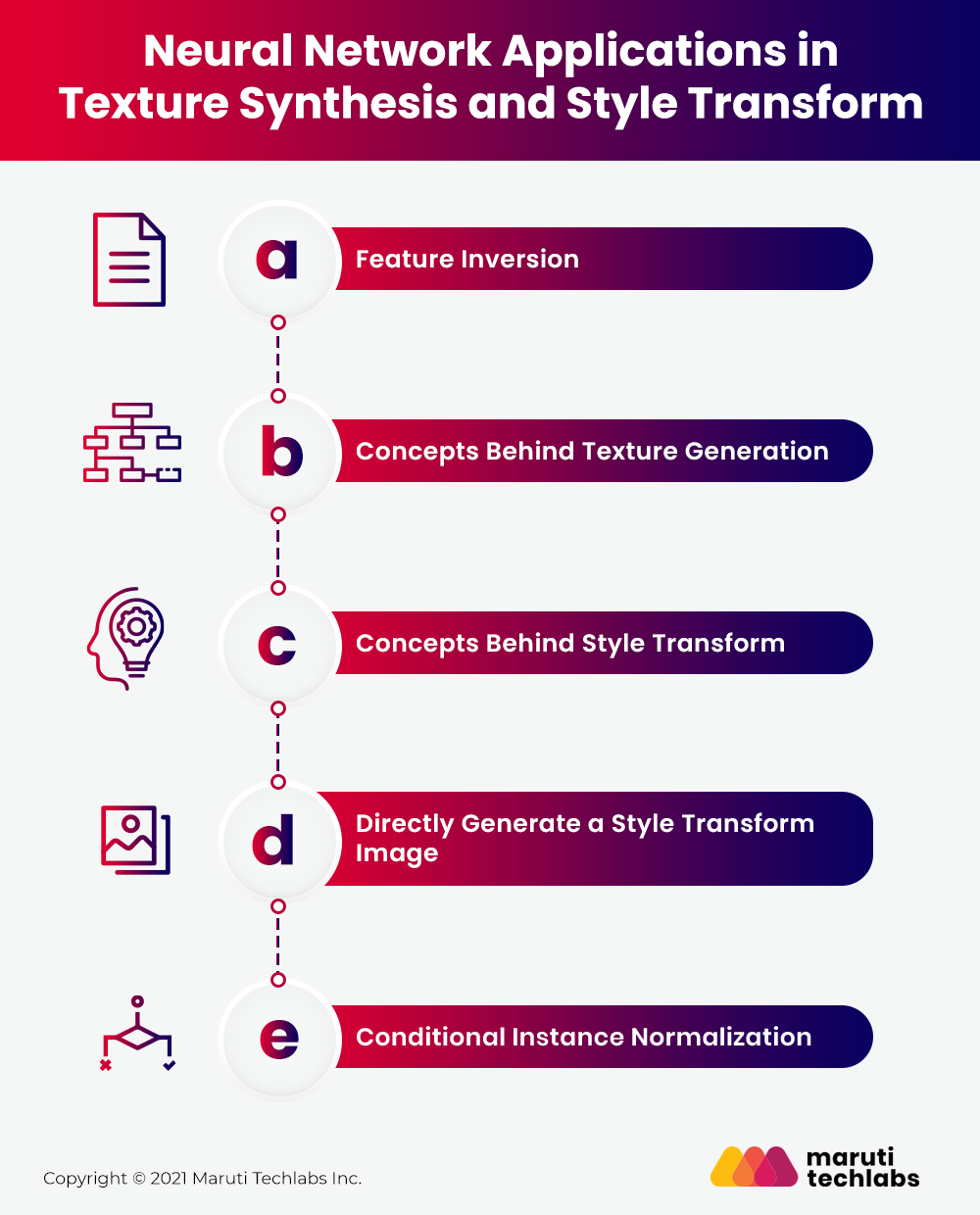 b. Concepts Behind Texture Generation 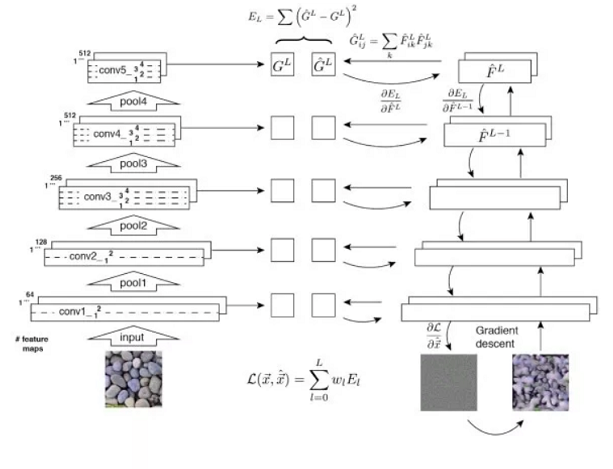 We can process the style transformation by creating an image that resembles the original image or changing the style of the image that matches the specified style. 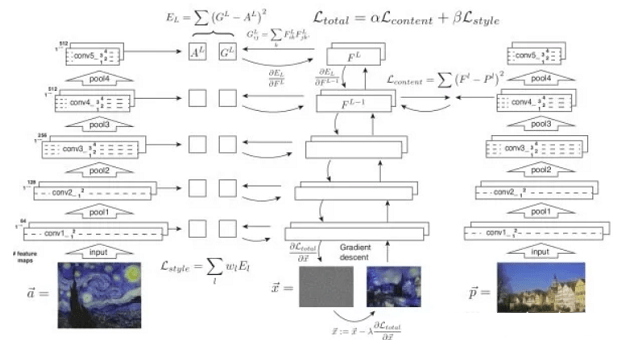 Therefore, during the process, the image’s content is taken care of by activating the value of neurons in the neural network model of computer vision. At the same time, the gram matrix superimposes the style of the image.

The direct style transformation requires only one iteration after the training of the model ends. Also, calculating instance normalization and batch normalization is carried out on the batch to identify the mean and variance in the sample normalization.

It changes the normalization of the style transformation network. So, there are numerous groups with the translation parameter, each corresponding to different styles, enabling us to get multiple styles transformed images from a single iteration process.

The major challenge for carrying out face verification/recognition is that learning is executed on small samples. Therefore, as default settings, the system’s database will contain only one image of each person, known as one-shot learning.

Therefore, the use of shared parameters will be inapplicable to verify or identify human faces. Hence, the DeepFace model uses non-shared parameters, especially to identify similar features of two images in the face verification process.

FaceNet is a face recognition model developed by Google to extract the high-resolution features from human faces, called face embeddings, which can be widely used to train a face verification system. FaceNet models automatically learn by mapping from face images to compact Euclidean space where the distance is directly proportional to a measure of face similarity.

Here the three-factor input is assumed where the distance between the positive sample is smaller than the distance between the negative sample by a certain amount where the inputs are not random; otherwise, the network model would be incapable of learning itself. Therefore, selecting three elements that specify the given property in the network for an optimal solution is challenging.

Currently, there are some popular methods in the industry to prevent such security challenges as facial expressions, texture information, blinking eye, etc., to complete the facial verification/recognition system.

When the system is provided with an image with specific features, searching that image in the system database is called Image Searching and Retrieval. But it is challenging to create an image searching algorithm that can ignore the slight difference between angles, lightning, and background of two images. 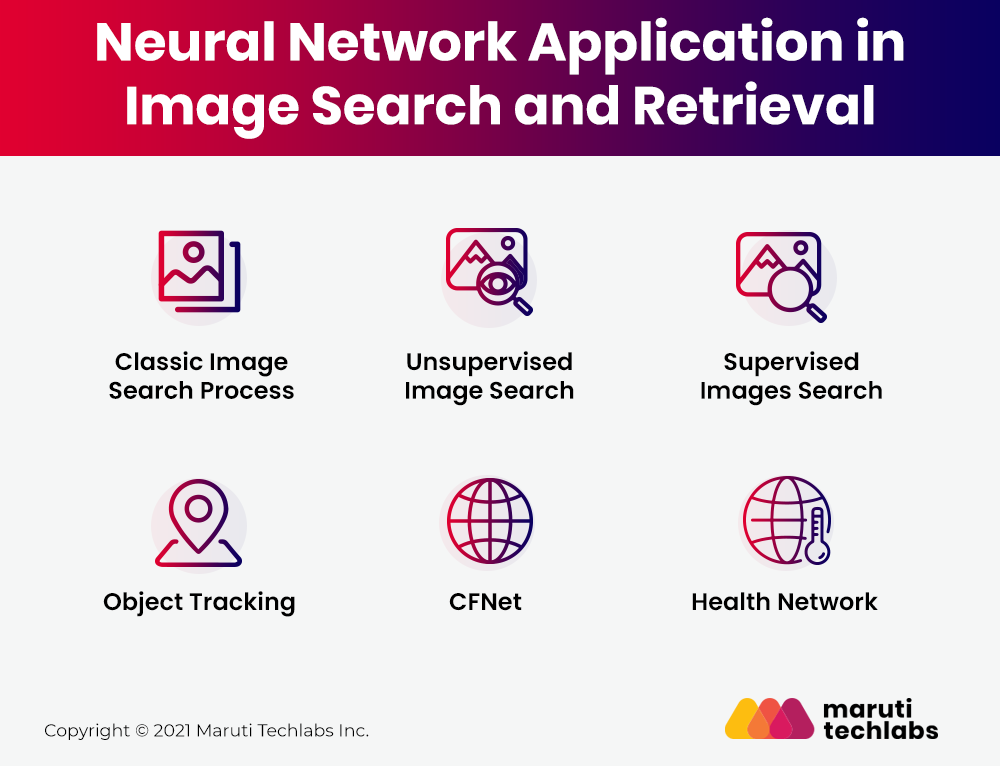 The challenge faced by the classic image search process is that the performance and representation of the image after the search engine algorithm are reduced.

The image retrieval process without any supervised outside information is called an unsupervised image search process. Here we use the pre-trained model ImageNet, which has the set of features to analyze the representation of the image.

Here, the pre-trained model ImageNet connects it with the system database, which is already trained, unlike the unsupervised image search. Therefore, the process analyzes the image using the connection, and the system dataset is used to optimize the model for better results.

The limitation to object tracking is that we don’t know where the target will be ahead of time. Hence, enough training is to be provided to the data before the task.

The usage of health networks is just similar to a face verification system. The health network consists of two input images where the first image is within the target box, and the other is the candidate image region. As an output, the degree of similarity between the images is analyzed.

In the health network, it is not necessary to visit all the candidates in the different frames. Instead, we can use a convolution network and traverse each image only once. The most important advantage of the model is that the methods based on this network are high-speed and can process any image irrespective of its size.

CFNet is used to elevate the tracking performance of the weighted network along with the health network training model and some online filter templates. It uses Fourier transformation after the filters train the model to identify the difference between the image regions and the background regions.

Apart from these, other significant problems are not covered in detail as they are self-explanatory. Some of those problems are:

A modern computer vision enables the system to visualize the data and analyze patterns and insights from the data. This data plays its importance in translating the raw pixels, which computer systems can interpret.

Compared to traditional computer vision models, deep learning techniques enable modern computer vision advancement by achieving greater precision in image classification, object detection, and semantic segmentation. We know that neural networks are part of deep learning and are trained instead of being programmed for performing specific tasks. Hence, it becomes easier for the system to understand the situation and analyze the result accordingly.

The traditional computer vision algorithms tend to be more domain-specific. In contrast, the modern deep learning model provides flexibility as the convolution neural network model can be trained using a custom dataset of the system.

Turn your imagerial data into informed decisions. Get in touch with us today!

Regression Testing – Strategies, Tools, and Frameworks
We use cookies to improve your browsing experience. Learn about our Privacy policyOk
Scroll to top