Learn how RPA in account payable can help organizations to streamline the processess.

We as a generation and mankind recently outlined a critical milestone in our progress. A robot was recently awarded the citizenship of a country. Robots and automation have broken the shackles of our imagination and have become a part of our reality. While we are still far away from realizing what we have managed to sell in science fiction movies, we are closer than ever. Robots and automation have, until now, allowed machines to act and work like humans. However, inching closer to the robots of tomorrow, we are enabling these inherently non-living beings to think like us.

Instead of imparting our actions to them along with our flaws and biases, we are giving robots the ability to think for themselves- just as we do, learn from their surroundings, and act on the basis of experience. It is getting hard to discriminate between a human and a intelligent bots already!

Businesses of today want to leverage automation- whether in its most minimal form or in its entirety. For enterprises, automation means-

By bundling automation in a software solution, we are enabling organizations to be empowered with this technology of tomorrow. Robotic Process Automation (RPA) is that quiet murmur that has now become a scream.

According to IoT Agenda, Robotic process automation (RPA) is the use of software with artificial intelligence (AI) and machine learning (ML) capabilities to handle high-volume, repetitive tasks that typically needed humans to perform.

With RPA, organizations can leverage quick-to-deploy, cost-efficient tools to infuse efficiency and intelligence to their processes- thereby significantly impacting their profits and revenue.

Robotic Process Automation as the Driver of Enterprise Transformation

Enterprises all around the world have always dwelled on this- “There’s got to be a better way!”

In reality, only the enterprises who have continually put up this thought in their meetings, in front of their leaders- have been able to gear themselves up for transforming their processes. To better their operational efficiencies, businesses look for newer ways to do the same thing- ones that would save time and operational costs.

Robotic Process Automation is their answer. Across the manufacturing industry, for instance, there have been several examples of leveraging automation to replace manual labor, making processes swift and seamless.

Only now, all other industries are now looking to grab this technology and make the most of it. While using an ERP solution is the first step towards automating processes, many enterprises are left with “more to be done” to reach their optimum operational levels.

These systems can mimic any human behavior and help organizations automate the monotonous and daily routines – thus, effectively freeing up their workforce for most critical tasks. These automated processes could be switching back and forth between applications, logging into software solutions, moving files and folders, copying and pasting data, extracting data from forms and documents and managing it, filling in forms, etc.

Processes that have a traceable pattern and can be taught to a machine via a set of instructions are the typical processes to automate through RPA.

Enterprise-grade automation is where RPA systems are easily and quickly deployed, and with automation installed in an organization, businesses kick-in digital transformation and bring about significant changes in their efficiencies.

The difference between traditional automation and Robotic Process Automation is more than a hairline (contrary to what we imagined). With traditional automation, you could make a machine do any task, any step of the operational process. RPA, on the other hand, is a form of automation that sticks to the front-end of your system and carries out tasks without having to move to the back-end for anything.

When it comes to deciding whether a traditional automation system or Robotic Process Automation would be the right choice for you, RPA, in most cases, is seen as a precursor to a full-fledged automation system.

RPA is when a more personalized experience is needed to automate a process that is complicated and requires access to a host of other applications. Scenario-based tasks are also preferably automated using RPA.

When asked if RPA could render traditional automation obsolete, Parikshit Kalra, SVP, Solutions and Capabilities at HGS, drew a comparison between a shovel and an excavator. When the task at hand can be handled with a shovel, you don’t need an excavator.

Needless to say, traditional automation is here to stay.

RPA Adoption – The HOW

A lot of work can be automated using RPA  in businesses spanning most industries. However, some chunk of these processes may need human intervention for decision making, reasoning, and/or judgment. The task of an RPA engineer, here, would be to assess the complete business process and draw the boundary of RPA, segregating it from the bits where a human would need to act.

Also, RPA cannot deal with exceptional scenarios in the working of a software system. This is another area where an RPA system would require human intervention. But, for everything else, Robotic Process Automation is the key to introducing efficiency into any enterprise.

As a matter of fact, an RPA engineer can look at all these exceptions, create rules within the RPA system and empowering it to handle more and more tasks. In an interview for McKinsey, Leslie Willcocks, professor of work, technology, and globalization at the London School of Economics’ Department of Management, was asked about the several considerations businesses need to make to adopt Robotic Process Automation.

According to Leslie, it is essential to analyze the process and the need for automation. As companies begin to look carefully, they will find some processes are better implemented with a traditional IT solution, and some others would function better with an RPA solution.

When a quick and easily deployable system is the need of the hour, RPA is the choice to make. It is advisable and desirable to take the IT department onboard sooner rather than later, as they are often in denial of RPA and its benefits. 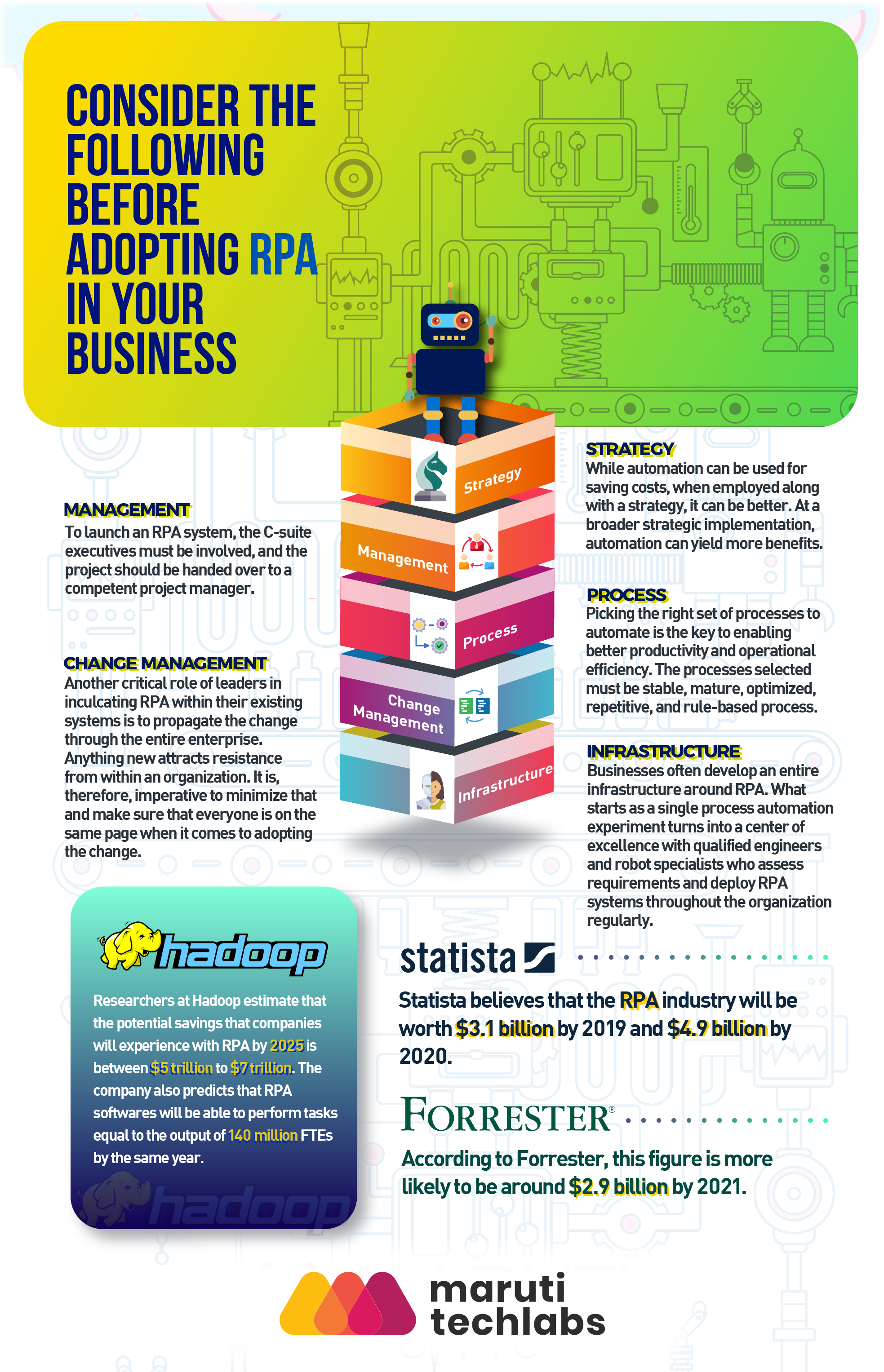 Why Every Business Needs RPA

Small and medium businesses, in particular, would benefit from the technology as in these businesses, a handful of people handle myriad of issues, including lowering operational costs, bringing new business, retaining existing business, improving workforce productivity, enhancing the quality of products and services, etc.

All businesses need an operational boost and want to optimize their processes. Back-end menial tasks hold a considerable chunk of your operational efficiency. Once these tasks are entirely or partly automated, your workforce can focus on the more essential ones, thus, skyrocketing your productivity as an organization.

As processes get streamlined and automated in any business landscape, customer service gets better, and customers feel it in their experience with a business. Robotic Process Automation, when applied strategically to any business, helps expand into higher avenues of efficiency!

According to a report by Forrester, the Enterprise Robotic Process Automation market is expected to reach over $2.9 billion by 2023, while Statista believes the industry will be worth $4.9 billion by just 2021. This massive growth rate of RPA is due to its inexpensive implementation costs and massive ROIs. Consequently, the adoption of the technology will surge.

The potential savings for companies that deploy RPA stand between $5 trillion to $7 trillion, by 2025 (based on studies conducted at Hadoop). Hadoop also estimated that, by 2025, RPA softwares will be performing tasks with an output level that will be equivalent to 140 mn full time employees.

At this rate, it is fairly evident that RPA adoption will be universal in no time. If you happen to be an enterprise looking to streamline and automate processes, the time to act is now.

12 Popular Benefits of RPA in Business

Here's the list of 12 widespread benefits of robotic process automation in your business.

Guide to a Successful RPA Implementation in 2020

All You Need to Know About Building your RPA CoE