Blockchain - Benefits, Drawbacks and Everything You Need to Know

Explore the blockchain and its benefits as an ever-changing technology with promising applications.

Harsh Makadia
Block Chain
min read
Blockchain - Benefits, Drawbacks and Everything You Need to Know
Explore the blockchain and its benefits as an ever-changing technology with promising applications.

Blockchain: something we’ve been hearing about a lot these days. What started out with the popularity of Bitcoin, soon seeped into mainstream business applications. Blockchain has overcome the infancy phase and businesses today are ready to utilize it in its full-fledged form – beyond its obvious uses for financial institutions.

While cryptocurrencies were the first favorite uses of the blockchain, the technology is revolutionizing all leading industries today. Spotify acquired the blockchain startup Mediachain Labs to develop solutions based on decentralized databases to connect artists and licensing agreements with the multitude of tracks on the platform.

Another instance of blockchain’s widespread applications is Warranteer. This is a blockchain application that enables customers to access information on the products they purchased and get prompt customer service in cases of any malfunction.

It has become apparent that blockchain has broken shackles and entered mainstream business operations across industries to prove its usability.

How does blockchain work?

To explain how blockchain works, let’s assume the example of its most common application- Bitcoin. Bitcoin is a digital currency, similar to any other national currency. To keep track of how many bitcoins each person owns, blockchain uses a ledger system- a file that maintains and tracks all transactions.

The ledger file is not stored on a central server – bringing us to the USP of blockchain – that it is a decentralized system. The ledger file is distributed across the world and stored on private computers that are all used to store data and perform computations.

When X wants to send 5 bitcoins to Y, they will broadcast a message to all nodes (personal computers) saying that X’s bitcoins should be reduced by 5 and Y’s increased by 5. Now, each computer will get this information and update their copy of X and Y’s bitcoin balances.

Blockchain allows everyone to see everyone else’s transactions and does not force you to trust a person or entity. Instead, special mathematical functions and codes are implemented to enforce security and reliability.

Each wallet is protected with a cryptographic method that uses a unique and distinct pair of connected keys: a public and a private key.

Each of these features of the blockchain technology brings us to a specific advantage of using it. 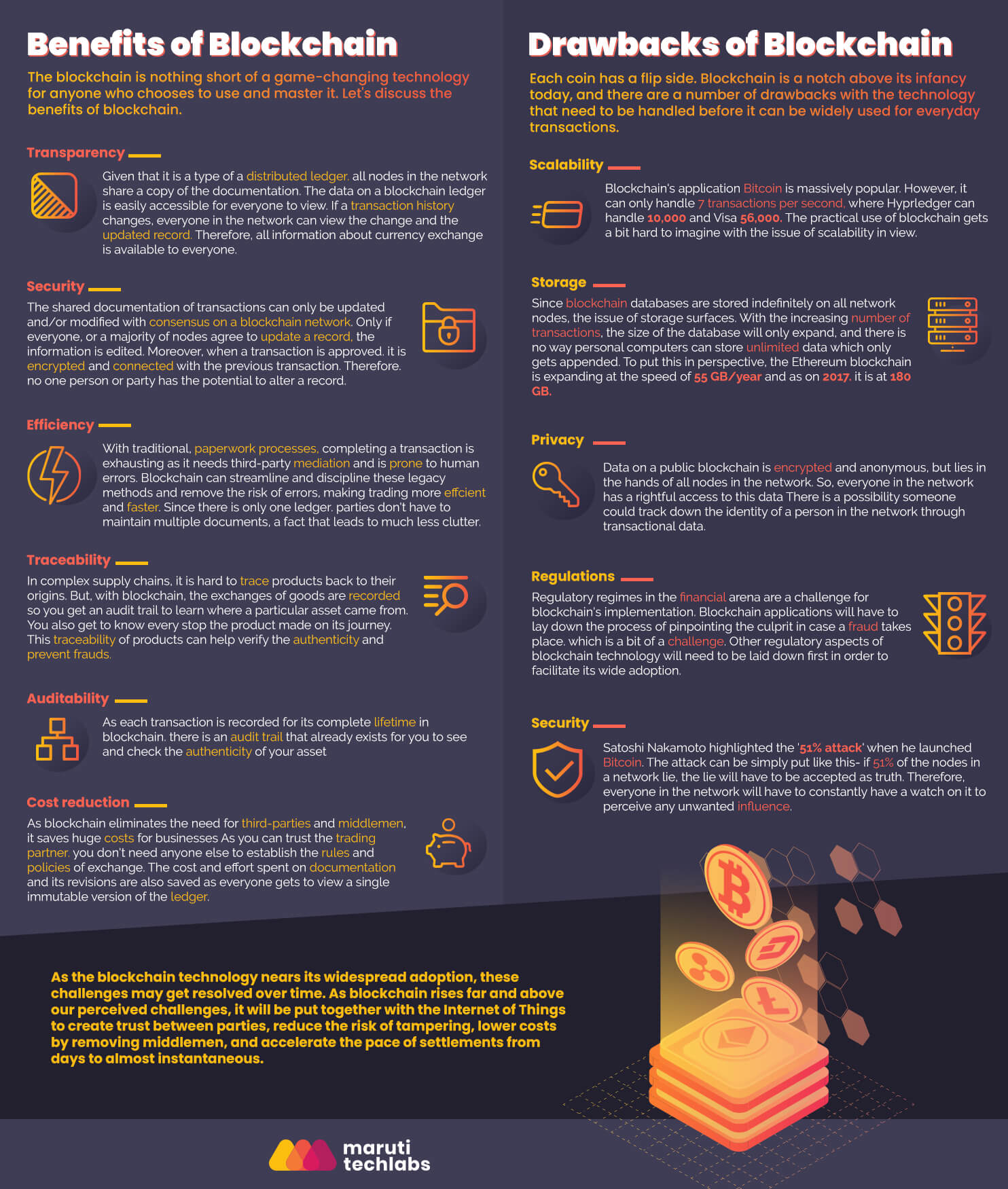 The blockchain is nothing short of a game-changing technology for anyone who chooses to use and master it. Let’s discuss the benefits of blockchain-

Each coin has a flip side. Blockchain is a notch above its infancy today, and there are some drawbacks with the technology that needs to be handled before it can be widely used for everyday transactions.

As the blockchain technology nears its widespread adoption, these challenges may get resolved over time. For its sweet advantages, developers and blockchain enthusiasts will surely find a way out of these bumps on the way!

A public blockchain, a fully decentralized platform where anyone can read and send transactions. The valid transactions are included in the ledger. Public blockchains are secured by cryptoeconomics, a combination of economic incentives and cryptographic verification. The degree of influence in the consensus process is proportional to the quantity of economic resources brought in the system.

In a private blockchain write permissions are kept centralized to one organization. In this system the access and permissions are tightly controlled and rights to modify are restricted to the central authority. This could be a concept with huge interest from FIs and large companies. A proprietary system built on private blockchain will reduce the transactional cost and increase validation efficiency.

The Way Ahead: Some Predictions for Blockchain

The future looks bright for blockchain. Here are a few promising applications of the technology-

As blockchain rises far and above our perceived challenges, it will be put together with the Internet of Things to create trust between parties, reduce the risk of tampering, lower costs by removing intermediaries, and accelerate the pace of settlements from days to almost instantaneous.

About the author
Harsh Makadia

Are finance and banking the end of Blockchain uses?

Here are examples of how blockchain is used in various industries as an evolving technology.

Blockchain Technology and its Implications on the Financial Platform

Learn more about blockchain technology and its implications on a financial platform.

How effective are AI, Blockchain & IoT in Insurance Claims Management?

Block Chain - 5 MIN READ
Are finance and banking the end of Blockchain uses?
Here are examples of how blockchain is used in various industries as an evolving technology.