How wearables influence the future of mobile applications?

Explore how wearables are influencing the development of mobile apps and what this means for the future.

Hamir Nandaniya
Table of contents
How will mobile applications change due to wearables?

Wearables seem to have opened up a section in the market which was completely non-existent. Not only this, the technology has helped open an entirely new world of possibilities and now it has come to a point where wearable technology is more advanced than hand-held technology. This is because it provides sensory and scanning features not typically seen in mobiles and laptops. The implications and benefits of wearable technology are immense and can impact several domains like fitness, healthcare, fashion, education, disabilities, media, transportation, gaming, music, tourism and finance. The goal of wearable technologies in each of these domains is to solve day-to-day human problems in real time by integrating functional, portable electronic devices into people’s daily lives.

Due to the popularity and demand of wearables across different industries, the demand for custom mobile applications for these smart gadgets is also increasing at a very fast pace. These wearables are forcing a lot of improvements and changes in the development of new mobile applications. A few of such variations in the offing are mentioned below: 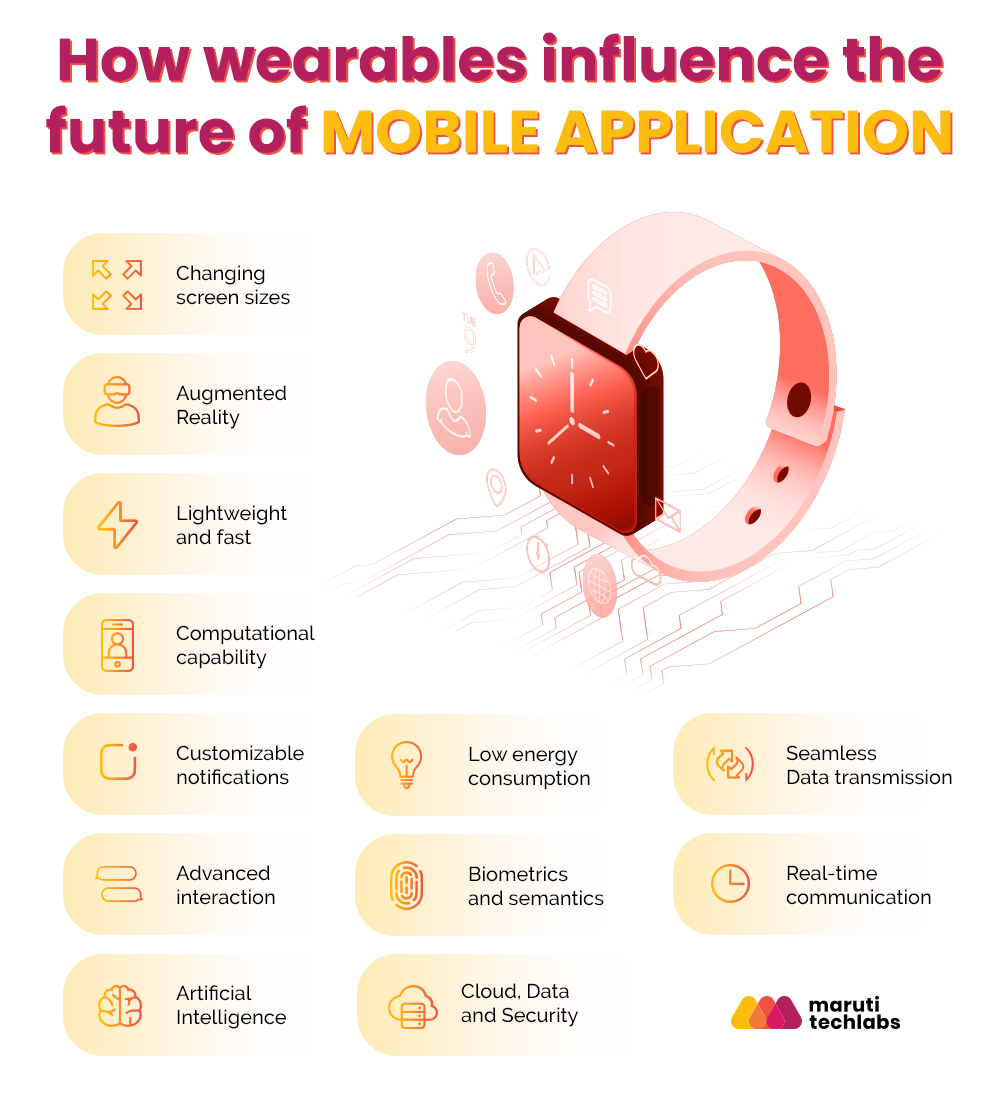 How will mobile applications change due to wearables?

Changing screen sizes
The upcoming mobile applications to be built for the wearable tech ecosystem would present precisely relevant information through dynamic changes in screen sizes. This will help make information design more pervasive and user-friendly.

Lightweight and fast
The mobile applications for wearables would be lightweight so that they can load quickly and respond to individual commands swiftly. The developers are currently developing apps whilst keeping this in mind.  With the apps running smoothly, people will feel more inclined to use their wearables.

Computational capability
The future mobile applications for wearable gadgets would have fast computational skills due to real time inputs and requirement of on-the-go outputs. Moreover, some of the inputs would be in the form of big data files which would require a lot of processing through sophisticated algorithms

Advanced interaction features
The future mobile applications for wearable devices would also have enhanced human interaction features, such as tapping and swiping or responding to voice commands. This will serve as a breath of fresh air and will sway people into being mesmerised by the app features.

Biometrics and semantics
The new mobile applications for wearables would allow integration of biometrics and semantics-based software that can help interpret emotions, track progress and detect biopotential (e.g., with the sensors available such as a multi-axis accelerometer, developers would have scope for greater innovation and create fascinating gesture detection enabled applications).

Artificial Intelligence
The future mobile applications for wearables would make use of artificial intelligence algorithms (using big data technologies) to predict user behaviour and make modifications in own execution. In this way, such mobile applications will improve and personalise user experience of wearable devices.

Augmented Reality
The upcoming mobile applications for wearables would make use of augmented reality techniques by enhancing the human senses of seeing, hearing, feeling and smelling. For example, augmented reality can be implemented to magnify voice commands, expand health-related data and improvise navigation through maps.

Cloud, Data and Security
In the future mobile applications for wearables, the cloud would be the primary data centre as far as data storage is concerned since it will act both as the storing and allocating place of data for the wearable device. In such a scenario, security would become important, and it will be necessary to make sure that secure standards are employed by the application to protect user data. Specifically, in cases of applications that deal with confidential user data in an open source standard environment, having a comprehensive security protocol will be important essential for users. Access to user data in the cloud and the application can be expedited with features such as biometric and voice recognition techniques.

To conclude, the evolution of wearable devices such as watches, spectacles, contact lenses, e-clothes, fitness trackers, headbands, beanies, belts, caps, and jewellery will lead to the development of more sophisticated and advanced mobile applications. These applications for wearables will blur the interface between humans and the hardware devices. And every mobile application for wearables will need a unique set of features depending on the industry and use the wearable is built for.

About the author
Hamir Nandaniya

Hamir is the VP of Product at Maruti Techlabs. With his technical acumen and engineering expertise, he continues to overcome tough business challenges by building and scaling creative solutions.

No matter what your industry is, here are 12 mobile app development trends you should know about.

Let's look at some of the most common challenges regarding mobile app security and how to overcome them.

SOAP vs REST | Differences & Understanding the Future of API

A comprehensive guide to finding the mobile API that will work best for your business.

Product Development - 10 MIN READ
12 Rising Trends in Mobile Application Development
No matter what your industry is, here are 12 mobile app development trends you should know about.

Product Development - 4 MIN READ
Challenges in Mobile App Security
Let's look at some of the most common challenges regarding mobile app security and how to overcome them.

Product Development - 4 MIN READ
SOAP vs REST | Differences & Understanding the Future of API
A comprehensive guide to finding the mobile API that will work best for your business.