8 Trends accelerating the shift to chatbot

The smart, conversational behavior of chatbot has come to delight the user. As per ZDNet, the year 2016 saw 33,000 chatbots being made available on Facebook Messenger.  The rise of chatbots is fuelled by the surge of messaging platforms that have redefined conversations with services and businesses. Last heard, Facebook Messenger, Viber, and WeChat put together have amassed more users than users that LinkedIn, Facebook, Twitter and Instagram bring together.

With messaging apps fast progressing into the platform of future, chatbots are not far behind. About 80% of businesses are planning to incorporate chatbots by the year 2020. What is driving this shift towards chatbot?

Below are some of the factors triggering the shift towards chatbot – 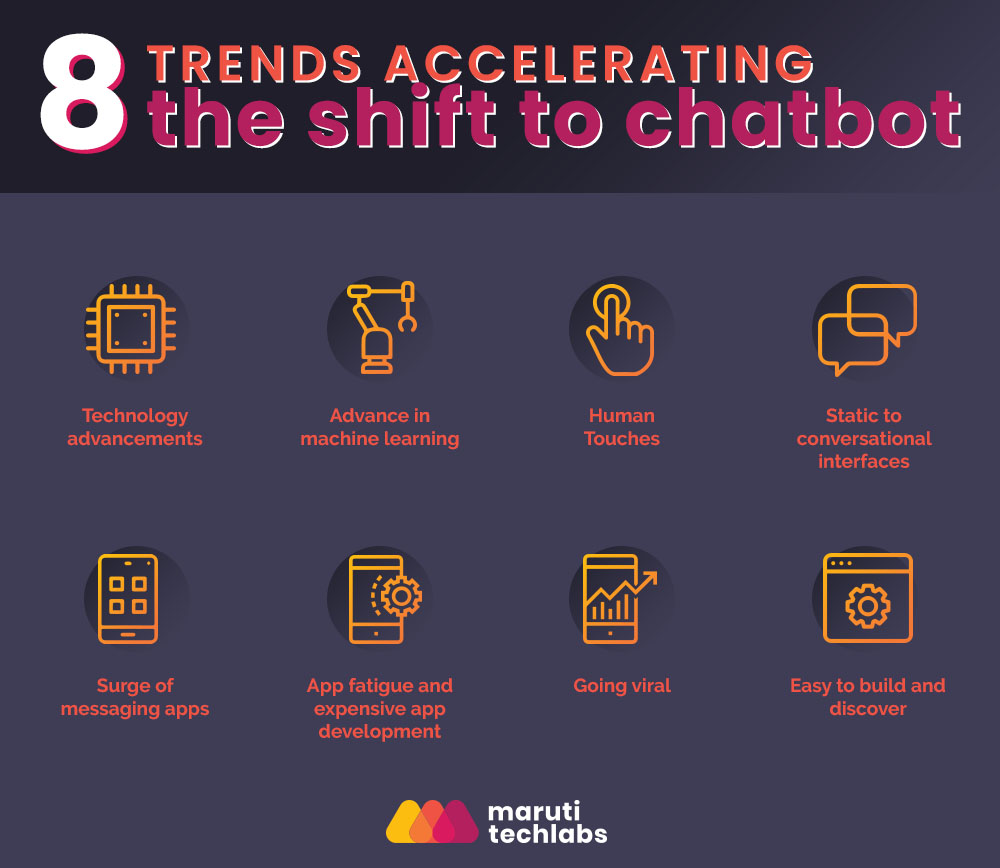 The significant factor driving the shift towards chatbots is couched in Moore’s law. Today, processing of heavy applications can be enabled through cheaper computing, which was considered prohibitively expensive earlier. Chatbots are integrated with messaging apps. Cloud computing and integration is making this possible as powerful integration techniques can be leveraged to ensure synchronization of apps with API. The emergence of conversational interfaces is turning chatbot into an independent and universal entity, adapt to the tone and subject used as per context.

Microsoft CEO Satya Nadella opined that the industry is on the threshold of leveraging the power of advanced machine intelligence and natural human language, at Build 2016. Deep learning algorithms are proving to be instrumental in solving problems, which at one time were complicated to be solved by writing traditional software programs. Chatbots gain self-learning ability through intent classification and pattern matching to interact with the user in natural language – made possible through advances in machine learning.

Customer preferences have moved from the static to conversational interface. Clients as on today want their issues resolved immediately, tasks to be accomplished easily and information to be found quickly. The conversational interface provides a human-like connection and talks with the user in his terms. Intelligent agents like Alexa and Siri have demonstrated how to sustain a conversation with the customers.

Chatbots are built to serve different purposes. No matter what you make the chatbot for, it brings the human touch and is more personal. Chatbot speaks to the user in his terms, responds to the user by changing tack based on the input given by the user. When the user interacts with a chatbot, he gets the feeling of chatting with a human on the other side. The user feels special when a human-personified chatbot is devoted to the user, being there to assist him wherever and whenever the user wants.

As of January 2017, Whatsapp recorded 1.3 billion monthly users according to Statista. Also, Facebook acquired 2 billion monthly active users as of the second quarter of 2017, according to Statista. Kik, on the other hand, has amassed more than 275 million global users as per Forbes.  People are using messaging apps more than they use social networks. Messaging apps make it easy for brands to converse and build a relationship with the target audience and gain traction. With the messaging app users expected to cross 2.10 billion by 2017, chatbots will enter the messaging-mainstream, become trendy and pervasive. Chatbots are emerging as a tool for having one-on-one conversations.

Apps were once personified the software gold rush. The drill of downloading an app on top of the dozen other apps on the mobile device is taking a toll on the customer. The novelty of apps is wearing off paving the way for app fatigue.

For customers, it is prompt service all the way – whether they want to order pizza, book a restaurant or check weather updates. App fatigue has made the messaging apps on the phone an ideal alternate – chatbots are developed and integrated with the messenger platforms to make prompt service possible. Unlike expensive app development, building a chatbot is relatively inexpensive.

When it comes to app downloads, all the users are spoilt for choice. But, it is the top 50 apps that are popular and downloaded by a majority of the users. The rest of the apps find it difficult to attract and retain customers. With chatbots living on messenger platforms, it becomes easy to promote frictionless interactions with their clients. Creating a good chatbot experience can lead to that experience getting spread virally. Roll, fun chatbot built by Kik made its way from zero users to attract half a million users within 30 days, as the experience went viral.

Chatbots are lightweight in the context of messaging platforms; they are easy to create and promote user interactions.  They have reduced friction, allowing users to reduce time in realizing their needs and wants. The chatbot rush is further fuelled by their ability to afford easier engagement, easier discovery and installation. Chatbot’s ability to respond well to user’s intent and their ‘always on’ nature keeps the user excited.

Chatbots are marching ahead to become the next prevalent form of communication. In a world rich in conversations, the gap between man and machine is being closed with the chatbots – they bring a human touch to user conversations with machines.

How data science is useful for all businesses?

How to design a conversation for chatbot?
We use cookies to improve your browsing experience. Learn about our Privacy policyOk
Scroll to top