All You Need to Know about Microservices Architecture in 2021

Get a crash course for all you need to know about microservice architecture in detail.

Backend technologies are evolving as fast as those that are customer-facing. As user demands are shifting and the mobile landscape is advancing, there is a need to level up the technology that keeps these systems working. We revolutionized the mobile development space with PaaS, IaaS, and SaaS, and are now leaning into microservices architecture to create apps that can connect with a broader mobile landscape.

The term “microservices” is being thrown around a lot lately. There’s been a clear spike in interest over this term over the last few years and the trend doesn’t seem to be slowing down anytime soon. It is clear that Microservices Architecture is at the peak of high expectations when it comes to the Gartner Hype Cycle model.

Let’s discover everything from what it means through to its uses.

Microservices or microservice architecture distinguishes an architectural style that encourages the development of smaller services with narrowly-focused interfaces that can be independently developed, deployed, scaled, and revised.

Microservices are a modern and alternative approach to the classic monolithic architecture which used to involve heavier tooling and more coordination efforts that ultimately added to developer friction.

The single-function modules built as part of microservices come along with clearly defined interfaces and operations. Microservices have grown more popular as enterprises look for more agility and move toward DevOps and a continuous testing framework.

Microservices are the answer to create scalable, testable software solutions that can be continually delivered within short bursts of time, as opposed to apps built with a monolithic architecture which take months/years to complete.

Microservices pose a lot of benefits for teams working in an Agile environment. Netflix, eBay, Twitter, PayPal, and Amazon are some of the companies who have already made the shift from a monolithic architecture to microservices.

As opposed to microservices, a monolithic app is built as a single sturdy unit, which makes making changes to the software a tiresome process. In a monolithic software, creating a tiny shift or a small change in a small part of the software might require you to launch an entirely new version of the software.

Scaling specific functions is also a lot of hard work in a monolithic application since you need to scale all parts of the software.

Microservices solve these issues by allowing developers to create applications that are as modular as they can get. Simply put, applications developed with microservices can be viewed as a suite of services rather than a solidified mesh of services.

Let’s further explore what characterizes and differentiates a microservice-based application from a monolithic application.

There are a few distinguishing traits of microservices architecture. Let’s have a look.

This least dependency state is the main benefit of microservices as it allows developers to change and redeploy specific parts of an application as opposed to the entire code. However, this characteristic of microservices comes with a cost. The cost of remote calls, remote APIs, and higher complexity as responsibilities are distributed among components.

This characteristic is easy for us to say, but hard for developers to implement. Most teams face this issue when they first migrate software from monolithic to microservices.

Microservices have properly scoped functionality boundaries that prevent developers from running into confusion when any tiny change is needed. As with monolithic apps, when a team has to make a small tweak in one part of the code, they most often have to sync up with other teams to check dependencies and see how their change can affect other parts of the application.

However, in microservices, you should always be aware of how much you stuff into each service because this sets the boundaries of the level of modularity you can introduce in your app.

Microservices act much like the classic UNIX system where the services receive requests, process them, and output a response accordingly which is in stark contrast with systems such as Enterprise Service Buses where systems are installed for message routing.

Microservices often involve a wide variety of platforms and technologies. Thus, they render centralized systems, not the optimal solution. The developers of microservices prefer decentralized systems as they continually strive to develop solutions to common problems – those which can be reutilized by other teams.

Microservices can also be characterized by a decentralized database management system where each service individually manages its own database.

Microservices don’t shatter everything around them when they fail. Apps designed with microservice architecture are capable of managing failure. In a scenario where several unique services interact with one another, there is a possibility one of those might fail.

When that happens, the service, without much ado, allows its neighboring services to continue while graciously getting out of the way. Continuous monitoring of microservices can help detect such a failure.

However, this need for monitoring adds significant complexity to the overall application structure.

Microservices architecture presents a solution to the issue when you can’t wholly anticipate the kinds of devices and platforms where your application might be accessed.

Monolithic applications that are now too rigid to continue can gracefully transition into microservices applications and interact with the underlying classic structure using APIs.

Why Microservices are Important

To understand better why microservices are revolutionary and essential for the future of app development, let’s understand what preceded them, i.e., the monolithic architecture.

Centralization lies at the core of a monolithic architecture, making updations and revisions a hectic task.

Here are a few challenges that existed with the monolithic architecture:

Microservices resolve almost all of these issues by allowing developers to work side-by-side in cross-functional teams and deliver products on time.

Here are a few salient benefits of microservices architecture:

If you are starting to develop an application, you might want to keep it modular. For all the benefits modularity brings, you might be trying to demarcate boundaries of responsibilities within your application.

Businesses and companies aim for microservices-based apps to introduce extensionality and ease-of-maintenance in their solution. However, theoretically, modularity can even be introduced in a monolithic architecture. But, the problem lies in the way we develop an application with a monolithic architecture versus microservice architecture. In the former case, developers are typically in haste to develop and deploy the solution and get it off their slate as soon as they can. 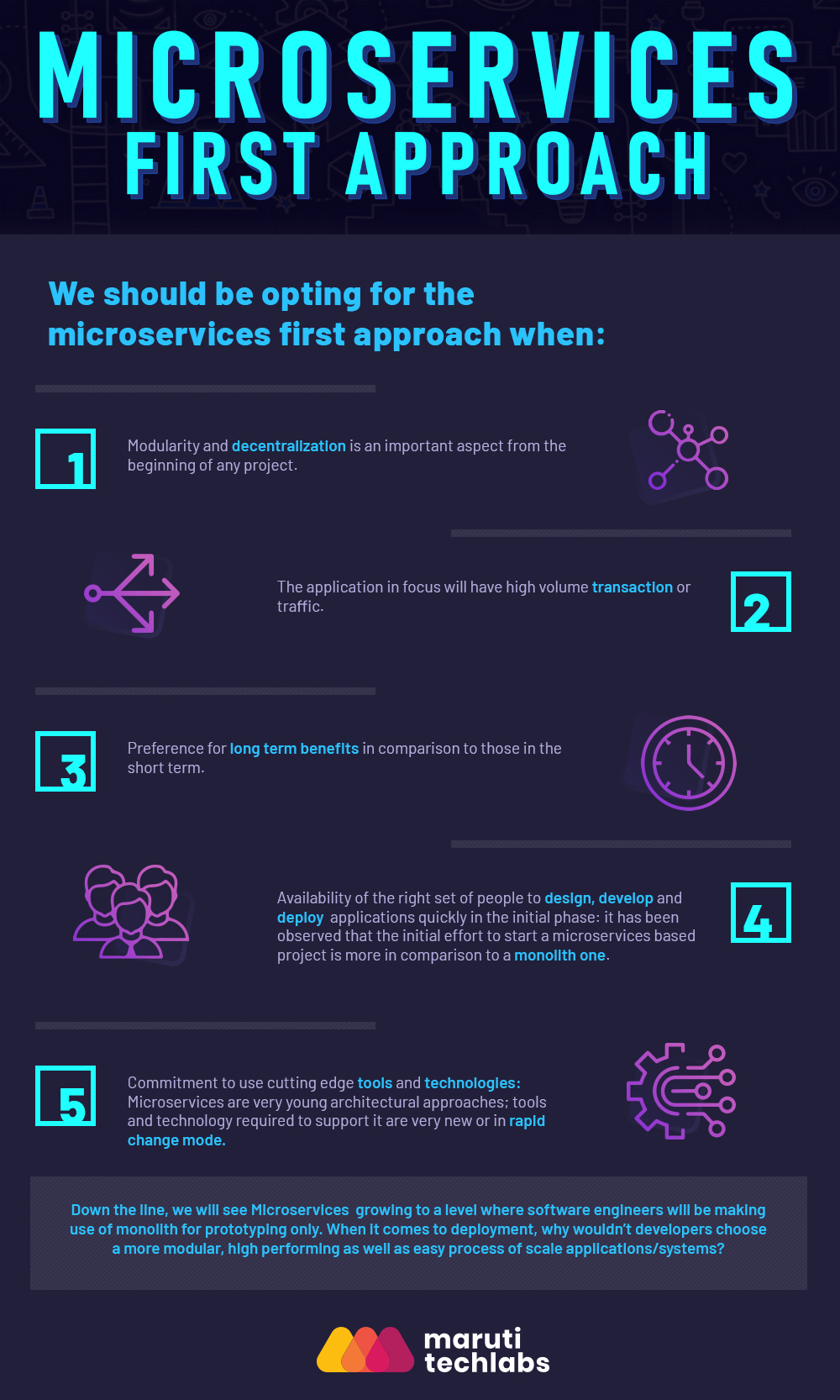 When this happens, boundaries of development blur and, consequently, the application loses its modularity. In the longer term, these overlapping services make it hard to scale and optimize applications. In essence of the architecture, even the simplest monolithic apps have a centralized database. This stands in stark contrast with microservices as decentralization lies at the core of microservices applications.

Therefore, the microservices first approach should be selected when modularity and decentralization are vital to the application, the app will have high volume traffic, long-term benefits can be preferred over short-term goals, the right set of resources is available to kick the project off, and when teams are committed to using latest technologies.

When to Use Microservices and Its Known Uses

One challenge that is often overlooked when implementing microservices is to decide whether or not it makes sense to employ the microservices architecture. When teams develop the first version of their application, they often don’t have the problems microservices solve. However, as the project progresses, they tend to face the same issues.

The distributed architecture of microservices slows down the development process and typically increases the need for human resources. This can be a hurdle for start-ups with limited talent in their pool and for businesses who are in haste to get their project off the ground.

Therefore, it is essential for enterprises to consider if microservices are the best bet for their application’s development. Most large scale websites such as Amazon, eBay, and Netflix have evolved their architectures from monolithic to microservices. Netflix, the popular video streaming service has a service-oriented architecture. Netflix handles over a billion calls every day and each call fans out six calls to backend services on an average. Amazon, on the other hand, originally had a two-tier architecture. But, when it came to scaling up, they migrated to a service-oriented architecture with hundreds of backend services.

Today, a lot of other websites call these services including the ones that implement the Amazon web service API. The Amazon.com website calls about 150 services to fetch the data that makes its webpage. eBay is another example of a website that evolved from a monolithic architecture to microservices. eBay is tiered according to the functionality so that each application tier implements the business logic for either buying or selling.

There are many other companies using microservices. Explore more here.

Microservices Architecture is not a new concept. They have previously been around in the form of Service Oriented Architecture, web services, and so on. However, the availability of the latest tools and technologies, the frustration of not getting the expected results with any other architecture, the massive adoption of IaaS and DevOps, and many other reasons have compiled on top of one another, leading to the surge in their popularity.

Down the line, we will see it growing to a level where software engineers will be making use of monolith for only prototyping. When it comes to deployment, why wouldn’t you choose a more modular, high performing as well as easy process to scale applications/systems?

Our application containerization services can help containerize your application to microservices architecture and get the most value from your information technology investments. Get in touch with our technical experts to help you transition to the cloud or upgrade your legacy application to a modern cloud-based application.

About the author
Mitul Makadia

Mitul is the Founder and CEO of Maruti Techlabs. From developing business strategies for our clients to building teams and ensuring teamwork at every level, he runs the show quite effortlessly.

Before changing your system to microservices, chek out the blog to understand why you need to do it

How To Configure API Gateway in Microservices Architecture

Considering the importance of API gateway, understand how they work and what they can do for you.

Learn more about serverless architecture, its benefits, and its drawbacks before adopting it to your organization.

Software Development Practices - 7 MIN READ
12 Microservices Best Practices To Follow - 2021 Update
Before changing your system to microservices, chek out the blog to understand why you need to do it

Software Development Practices - 19 MIN READ
How To Configure API Gateway in Microservices Architecture
Considering the importance of API gateway, understand how they work and what they can do for you.

Software Development Practices - 9 MIN READ
Serverless Architecture The Future of Business Computing
Learn more about serverless architecture, its benefits, and its drawbacks before adopting it to your organization.