Is artificial intelligence the key to combat fake news?

Explore how artificial intelligence-driven data is the key to the lens of misinformation.

Pinakin Ariwala
Table of contents
IS ARTIFICIAL INTELLIGENCE-DRIVEN DATA VERACITY THE LENS ON MISINFORMATION?
HOW TO DEAL WITH MISINFORMATION DYNAMICS?
HOW IS FAKE NEWS UNEARTHED?
ARE THERE TOOLS TO COMBAT FAKE NEWS?

The Verge reported that the news around Ebola was wreaking havoc in Texas towns. It was spreading like wildfire on the social landscape and these were messages from sources that sounded like newspapers. This happened in 2014 and what followed were trails of fake news sending shock waves across the media and user world.

As per The New York Times, just before the presidential elections in the US, fake news and memes became the tools for perpetrators to influence the outcome of elections. Fake news is rearing its ugly head time and time again. Not for nothing are the tech behemoths, Facebook and Google as well as media companies waging war on fake news. Is there a way to differentiate the fake news from the truth?

The trouble begins when too much of information is shared through the internet – information that needs more than a human mind to identify the fake enjoying the status like the original. In this realm, artificial intelligence and big data have emerged as potent tools to track news stories and identify fake news items playing the trick on the user.

IS ARTIFICIAL INTELLIGENCE-DRIVEN DATA VERACITY THE LENS ON MISINFORMATION?

Any news becomes a fake news if the information presented is incorrect or information doesn’t represent facts that it is expected to carry. When it comes to information, it is also about assuring the veracity of information as it is about moving, processing and securing information. In short, fake news and information are more of a big data veracity issue.

When it comes to handling fake news, none have put a braver face than Facebook. With trillions of user posts, Facebook realized that manual fact-checking wouldn’t do any good to solve the fake news problem. Facebook turned to artificial intelligence to arrest this problem. Artificial intelligence is being leveraged to find words or even patterns of words that can throw light on fake news stories.

As the volume of data grows bigger by the day, so is the chance of handling misinformation as it challenges the human ability to uncover the truth. Artificial intelligence has turned into a beacon of hope for to assure data veracity, and more importantly, identify fake news. 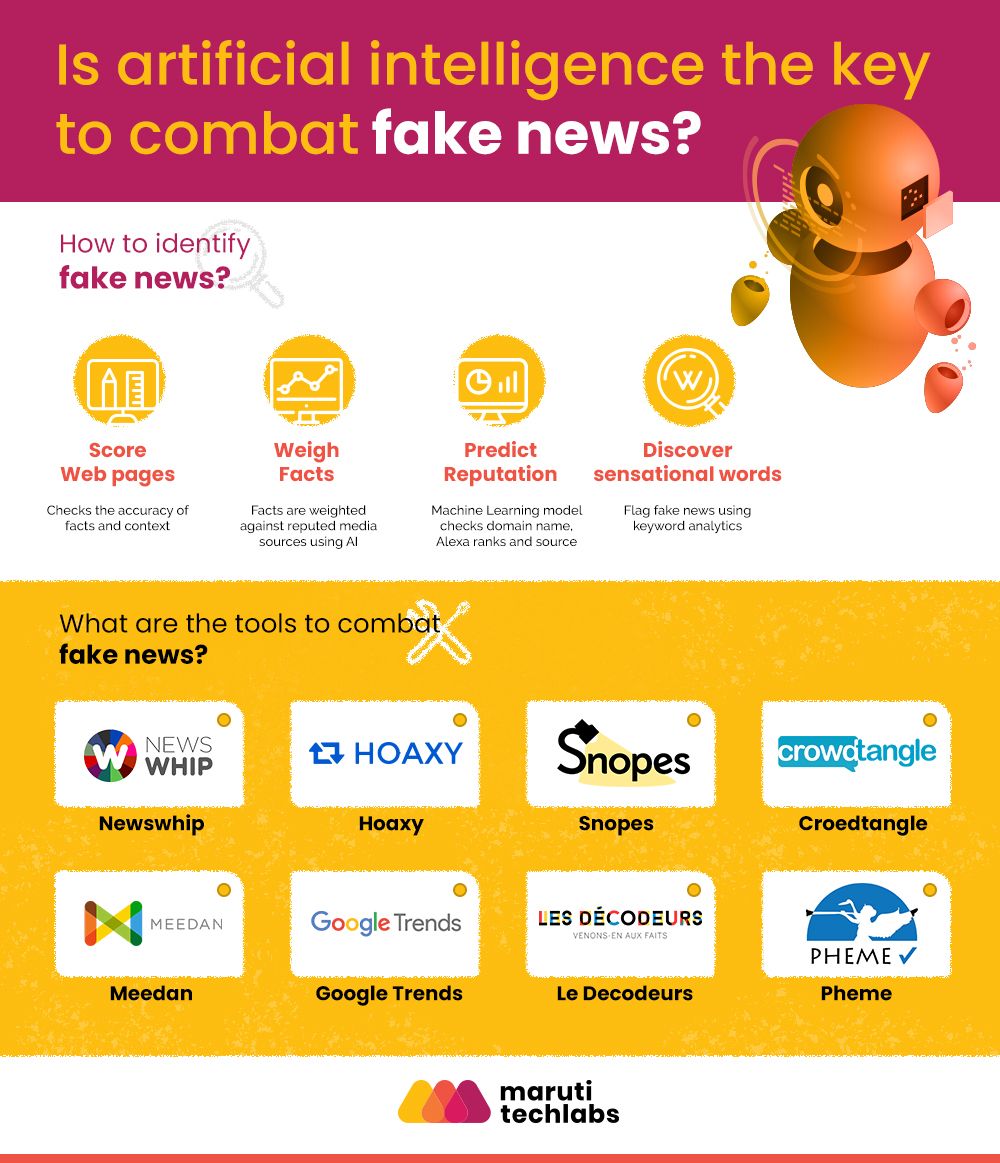 HOW TO DEAL WITH MISINFORMATION DYNAMICS?

Spreading misinformation across the social landscape is not wholly about accidental inaccuracies; it is more about intentional misinformation that is dynamic. Misinformation dynamics is all about connecting fake news to the new big data concept called the data veracity.

Borge-Holthoefer and Berti-Équille came up with the staggering revelation that traditional approaches stand unequal to deal with this intentional misinformation. Where misinformation spreads like fire, dealing with fake news calls for sophisticated approaches based on artificial intelligence to determine data veracity and the authenticity of information.

HOW IS FAKE NEWS UNEARTHED?

As the world gets ready to tackle fake news, technology has set the trend by showing us how to identify fake news. Here are some ways leveraged to fight fake news.

Scoring web pages is a method pioneered by the tech giant Google. Google takes the accuracy of facts presented to score web pages. The technology has grown in significance as it makes an attempt to understand pages’ context without relying on third party signals.

To combat fake news, it is imperative to weigh facts that the news in context purports to share. Artificial intelligence is now at the core of ascertaining the semantic meaning of a web article. For instance, an NLP engine can go through the subject of a story, headline, main body text and the geo-location. Further, artificial intelligence will find out if other sites are reporting the same facts. In this way, facts are weighed against reputed media sources using artificial intelligence.

Even before eyeballs capture news items, knowing the reputation of the source sharing the news will do a world of good to nip fake news problem in the bud.

The reference to The Wall Street Journal would raise no qualms about the reputation of this source. This becomes stronger when it is compared with another source that is unknown. It is now possible to determine the authenticity of a website. By creating a machine learning model, a website’s reputation can be predicted, considering features like domain name and Alexa web rank.

When it comes to news items, the headline is the key to capture the attention of the audience. It is for this reason that sensational headlines become a handy tool to capture readers’ interest. When sensational words are used to spread fake news, it becomes a lure to attract more eyeballs and spread the news faster and wider. Not anymore, as artificial intelligence has been instrumental in discovering and flagging fake news headlines by using keyword analytics.

ARE THERE TOOLS TO COMBAT FAKE NEWS?

To combat negative forces, you will have to fight fire with fire and in this case, fight fake news with robust tools.  French news media has already sprung into action by opening a fact-checking service to stop fake news items in their tracks. There are robust tools that have proved useful in debunking false news items. Forbes.com had given a summary of some tools used to fight fake news.

Fake news is now a growing menace in the media world. With artificial intelligence and big data showing the way to tackle fake news items, the belief that truth will dawn on the reader gets stronger by the day. But, this is just the beginning.

How can Artificial Intelligence for Customer Support assist Businesses?

Discover how artificial intelligence can hugely embrance the customer support service for your business.

Explore how artificial intelligence and machine learning are hot topic in tech industry.

Check how machine learning has undergone a massive transformation to facilitate fraud detection.